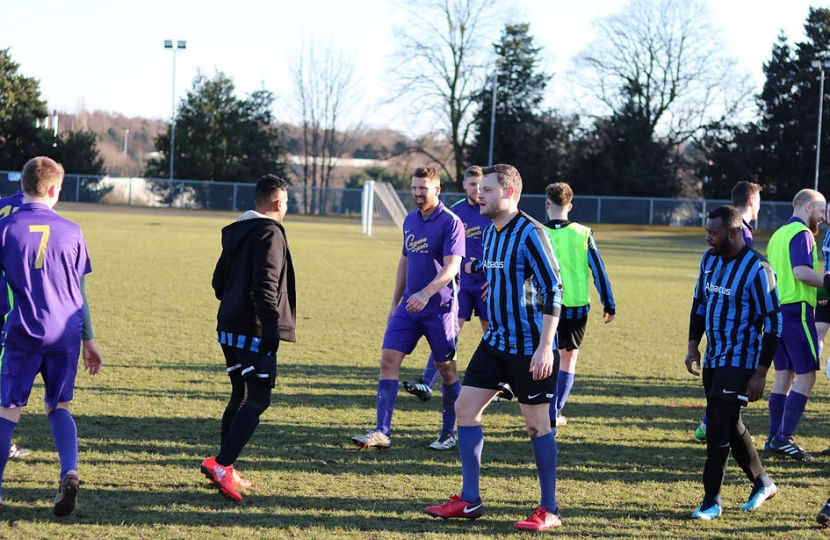 The ‘Frenbot Charity Football Match’, which was organised by two Mansfield resident’s, Craig French and Russell Talbot, aimed to raised money for the National Autistic Society. So far, the event has raised over £3000 from ticket sales, raffles and auctions on the day.

Mansfield MP Ben Bradley who played in match said it was ‘a really good day actually, there were a lot of people supporting the match, there was food, it was a really good positive atmosphere, and we’ve managed to raise a lot of money for the National Autistic Society. It was really good to be able to get my boots back on, get out on the pitch and get stuck in with the game’

Speaking afterwards, Craig French said that they were ‘just two local lads trying to make a bit of a difference, but we couldn’t have done it without the support that we received from local people, local companies, and Ben Bradley. We were really shocked by the amount of support we got, but it made the day go really well’

Russel Talbot said that they are ‘already working on planning next year’s match, we want to do it bigger and better, so if anyone has any ideas about what we should do then let us know!’

Discussing Ben’s involvement in the match, they said ‘It was really good having Ben there playing with us, he just got stuck in and was one of the lads. When he said he would play for us a few months ago, he never backed out, and he didn’t’ back down on the pitch either!’

As well as playing in the match, Ben was asked to present the raffle prizes to the winners.

The Frenbot Charity Football Match has a ‘Justgiving’ page, where donations can be made to the National Autistic Society. This can be found at: https://www.justgiving.com/fundraising/frenbot